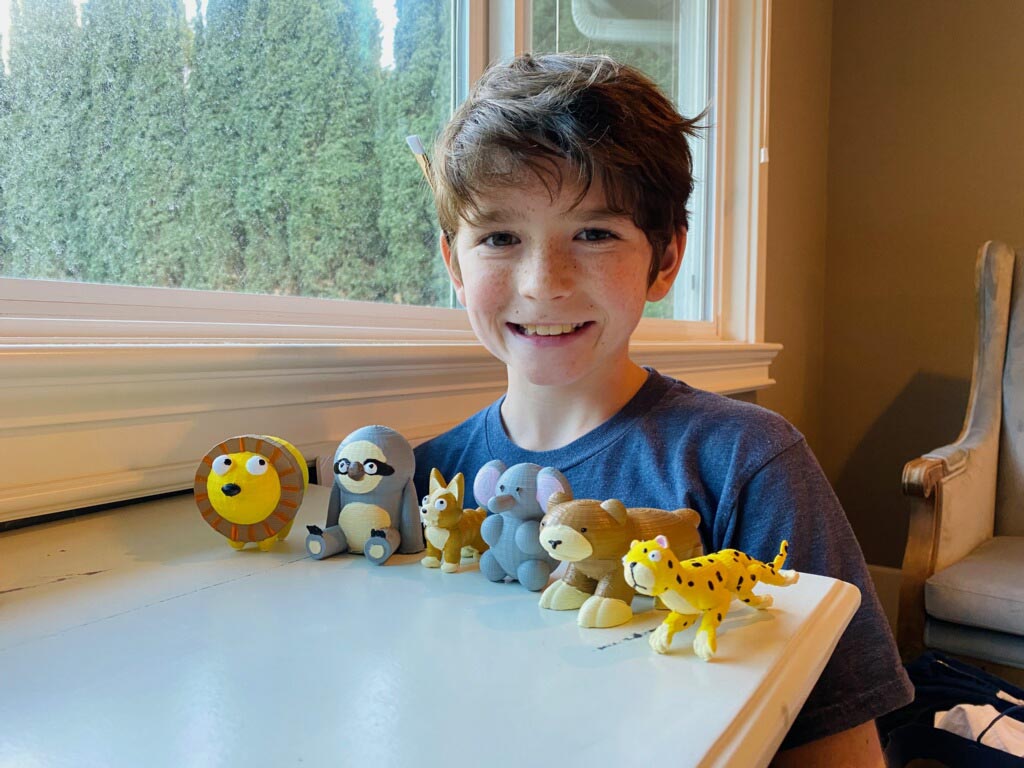 Ten year-old Crescent Elementary School student Jonathan is a lot like most of his fellow fifth graders. Going by the nickname “Fox”, he loves to play basketball in his free time, and his favorite subjects are math and his STEAM classes where he first began to learn about the process of designing three-dimensional objects, or CAD (Computer-aided Design).

Where he really stands out is with his recently-discovered passion for just that. He excelled at learning the fundamentals of a simplified 3D modelling program called Tinkercad® to create several class projects including a chess piece, a name tag, and a pair of pixelated glasses that could be imported into the popular sandbox building and crafting video game, Minecraft. His teacher, Mr. Rich Ireland was very impressed with the progress he had made in such a short time, explaining that Fox was always the first student in the class to finish his designs.

Having thoroughly enjoyed CAD-ing during his class time, Fox took things one step further and with the holiday season right around the corner, became inspired to create his own custom-designed Christmas presents for his whole family all on his own. He began by asking each family member what their favorite animal is, with his youngest two year-old baby brother getting a lion because “he likes to roar like one”, his five year-old brother picking a cheetah, his eight year-old sister choosing a sloth, his mother an elephant, and his father a bear, in honor of his best friend nicknamed “Brother Bear”.

As if all those animals weren’t enough, Fox even decided to design an extra Corgi dog figure to give to a close friend. Once he had all the animals chosen, it was time to get to work. Fox spent nearly a month in total carefully hand-designing each animal at home after school, all without any help.

After he had completed and finalized each animal figure, Fox was ready to bring them to life with the help of a 3D printer. Unfortunately, he ran into a roadblock before the printing process could begin: Neither he nor his instructors had enough experience with 3D printing to successfully print all of his animals in time for Christmas. Disappointed, and with his school’s winter break fast approaching, he resigned to have them be made after the holidays, effectively missing his window to give the gifts on Christmas day itself.

That would be the end of this story, if it weren’t for the quick thinking and support of his teacher Mr. Ireland and his principal, Mrs. Shele Tamaki. The last week of school before the winter break, Ireland made a call to Spyder3D® and explained the dilemma at hand. After hearing the inspiring story of Fox and his hand-designed figures, our very own CEO Mr. Joe Bloomfield had Ireland send each design file over and 3D printed them at our office in Brea, making sure to leave on the support pieces to educate Fox on how the printing process builds each piece upward.

Once each of the animals were finished printing, the Spyder3D® team paid a very special visit to Crescent Elementary on their last day of classes before the winter break to surprise Fox in class with his fully printed figures. Upon entering the room with Mr. Ireland and Mrs. Tamaki, the team was introduced and Fox was brought to the front of his room to receive his figures.

Fox received the VIP treatment, getting temporarily dismissed from class to receive an exclusive interview in the campus STEAM room conducted by our Head Copywriter Mr. Benji Tobi and Mr. Ireland. There he explained how he decided to make each animal as Christmas gifts and the reason behind choosing each animal. After adding that he and his mom planned to hand-paint each animal, Mr. Ireland further surprised young Fox, generously gifting him a paint set so that he wouldn’t have to purchase the paints on his own.

Not only that, Mr. Ireland noted that due to time constraints, Fox wasn’t able to print anything for himself, and for being so selfless, offered him the chance to make a larger figure of any animal he desired once school was back in session. His first choice? A fox, naturally.

Here are some shots of his figures once they’ve been cleaned up and painted:

For someone so young to take it upon themselves to create such a thoughtful gift by hand takes a very kindhearted and creative mind. We commend Fox for his selflessness and creative skillset and can’t wait to see what creations he comes up with as time goes on. From all of us at Spyder3D®, we hope everyone had a great holiday and a happy new year.